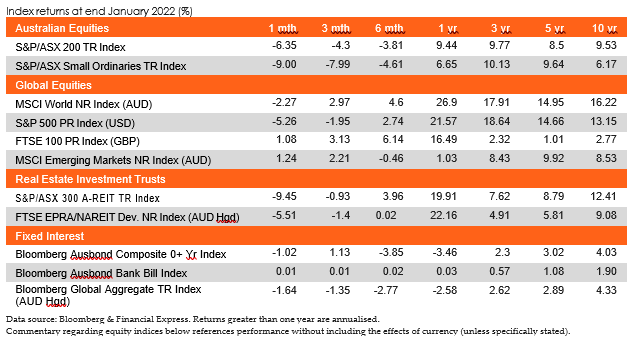 The Australian share market closed out January 2022 with the S&P/ASX 200 losing -6.4% with eight out of the eleven sectors within the Index finishing lower.

Specifically, Energy was the standout sector with a return of +7.9%, whilst Utilities (+2.6%) and Materials (+0.8%) also finished positive. A heavy decline in the Information Technology sector (-18.4%) and Health Care sector (-12.1%) led what was a dismal month for the broader market.

The Energy sector was boosted by surging prices and a bullish outlook for Brent and Crude Oil in light of various tailwinds for the sector such as tight supply, geopolitical tensions and reduced fear around future lockdowns. Once again, the Information Technology sector suffered substantial losses as investors rotated from growth stocks. The catalysts included rising rates along the yield curve and several central banks indicating forward guidance of tightening monetary policy and quantitative easing to combat inflationary pressures.

Growth and Equal Weight led the decline amongst factors for the month with losses of -8.4% and -7.9% respectively. All factors finished with negative returns with growth providing the largest fall. Over the past 12 months, value is the leading factor (+14.2%), with Equal Weight (-5.7%) delivering the lowest 3-month returns.

Subsequent to a positive end to 2021, global markets struggled in the first month of the year, challenged primarily by prospective interest rate hikes and geopolitical tensions in Ukraine.

As the AUD fell over the month of January, all of the following figures are in local currency terms for relative comparability. Developed markets slumped over the month of January declining by -4.9%, Global small caps continued to lag their broad cap counterparts posting a - 7.0% loss for the month. Emerging and Asian markets fared somewhat better with monthly returns of -1.8% and -3.8% respectively.

The key focus for investors worldwide continues to be the impact that inflation will have on markets. This has seemingly created favourable market conditions for value stocks over the last month, with value displaying monthly outperformance of over 7.4% relative to growth according to the respective MSCI ACWI Value and Growth indices in local currency terms. This is only the second time since the inception of the index that Value has outperformed growth in excess of 5%.

M&A activity was quieter during January across the ASX200 A-REIT sector. Centuria Capital Group (ASX: CNI) announced it has secured, off-market, the West Village in Brisbane, for $202 million, as part of an existing institutional mandate on behalf of an international sovereign wealth fund. Centuria Industrial REIT (ASX: CIP) announced a portfolio acquisition of six high-quality industrial assets across the eastern seaboard of Australia totalling $132m in value.

Despite the volatility in financial markets during January, the Australian domestic housing market advanced, with all CoreLogic reported cities experiencing positive growth during the month. Brisbane led the charge, advancing 2.3% in January. Brisbane (incl Gold Coast) is on top for YoY returns, up 30.1%, closely followed by Brisbane with 29.2%. The CoreLogic 5 capital city aggregate rose by 0.8% in January.

Fixed Income markets performed poorly throughout January, as concerns surrounding high rates of inflation and tight labour markets resulted in increasing yields. The Reserve Bank of Australia recently announced an end to their quantitative easing program on 10 February, but Governor Phillip Lowe has not given any indication of an increase to the cash rate in the short term, with the Board wanting to see inflation sustainably within their 2-3% target range, and increased wage growth first. Despite these statements, markets are currently pricing in 3-4 rate hikes before the end of 2022.

Over the course of January, yields for 10-year Australian Government Bonds increased by more than 20bps. This was the primary driver behind the Bloomberg AusBond Composite 0+ Year Index’s performance of -1.0% throughout January. Credit spreads also widened over the course of the month, further contributing to the Index’s poor performance.

Internationally, the US has been facing high levels of both inflation and wage growth, which has driven the Federal Reserve to adopt a more hawkish stance. While there has been no rate hike yet, the Federal Reserve’s forward guidance suggests that an increase will occur within the next few months, which is in-line with current market expectations. This, among other events, resulted in the Bloomberg Barclays Global Aggregate Index (AUD Hedged) returning -1.6% over the course of January, with currency fluctuations resulting in the unhedged variant returning 1.1%.

The RBA left the cash rate unchanged at 0.1%, as widely expected, and decided to stop the A$275 billion bond- buying program with the final purchases to take place on February 10. The board emphasized that the halt in quantitative easing did not imply a near-term hike in interest rates as it was still prepared to be patient.

Retail sales decreased 4.40% in December, in line with expectations. The unemployment rate in December was 4.2%, 40bps lower than expected and lower than the 4.6% the previous month.

102.2 in January, with consumers in NSW and VIC appearing less unsettled by the rapid spread of the Omicron variant than those in states experiencing their first major wave of COVID infections.

The Markit Composite PMI fell to 46.7 in January, pointing to the first contraction in private sector activity in four months due to the latest surge in COVID infections as operations were disrupted.

The trade surplus dropped to $8.36 billion in December from an upwardly revised $9.76 billion in the previous month, the smallest surplus since March 2021.

Global Covid-19 cases continue to rise with numbers surpassing 380 million cases and ten billion vaccine doses administered as at the end of January. COVID, especially the Omicron variant, remains a drag on activity and consumer sentiment. The IMF sharply cut global growth forecasts for 2022 to 4.4% in its January update, with higher-than-expected inflation and the Omicron variant worsening the outlook for the global economy. Escalating tension between Russia and Ukraine has put increased pressure on already high global energy costs.

In the US, the Federal Reserve kept its policy rate unchanged at 0.00-0.25% at its January meeting and announced that with inflation well above 2% and a strong labour market, it expects it will soon be appropriate to raise the target range for the federal funds rate.

The annual inflation rate accelerated to 7% in December, a fresh high since June 1982, but line with market expectations. Consumer sentiment dropped to 67.2 in January (68.8 expected), the lowest level since November 2011, with COVID concerns largely driving this fall.

The Markit Composite PMI slumped to 50.8 in January, signalling the slowest pace of expansion in business activity since July 2020. The Philadelphia Fed Manufacturing Index increased from 15.4 to 23.2 in January, above the expected 20.0.

The European Central Bank made no change to interest rates at its January meeting, holding them at 0.0%, and pledged to reduce its bond purchases this year despite the record rise in inflation.

Retail sales fell 3.0% in December, the biggest decline in 8 months and far below the expected 0.5% increase.

Annual retail sales came in at 2%, well below the expected 5.1%.

The unemployment rate fell 10bps to 7.0% in December, which was slightly below market expectations of 7.1%.

The Markit Composite PMI dropped to 52.3 in January, signalling the continued slowdown in the private sector as COVID-19 constrained activity.

In the UK, the base interest rate remained at 0.25%, with an increase to 0.5% likely in February amid growing concern over the pressure on households from high inflation.

The November unemployment rate came in at 4.1%, the lowest rate since June 2020 and below market expectations of 4.2%.

The Markit/CIPS Composite PMI edged down to 53.4 in January from 53.6 in December, missing market expectations of 55.0. This is the slowest rate of output expansion since the recovery from lockdown began in March 2021.

Retail Sales for December were down 3.7% on the prior month, well below expectations of a 0.6% fall. Annual retail sales were down 0.9%, far weaker than the 3.4% growth in the prior month and largely due to Omicron related disruptions.

In China, GDP rose 1.6% in Q4 2021, above the expected 1.1% rise, with the yearly rate also coming in ahead of expectations at 4.0%. Industrial production rose year on year 4.1% in December, higher than the expected 3.6% and largely driven by an increase in energy production.

The unemployment rate rose marginally to 5.1% in December, the highest rate since August 2021.

Annual retail sales eased in December to 1.7%, well below the 3.7% expected. This was the lowest figure since August 2020, as consumption weakened due to sporadic COVID-19 outbreaks.

The Caixin Manufacturing PMI fell to a 23-month low of 49.1 in January, below expectations of 50.4, while the Caixin composite PMI came in at 50.1, down on the 53.0 in December. The latest readings point to the second contraction in factory activity in three months, amid COVID-19 flare-ups and strict control under the country’s zero coronavirus approach.

Beijing has been preparing for the 2022 Winter Olympics, starting on 4 February, amid strict Covid restrictions that will effectively create an ‘Olympic bubble’ to separate it from the rest of the city.

The Bank of Japan left interest rates unchanged at - 0.10% during its January meeting. It also stressed that it would maintain its ultra-loose monetary policy even as its global counterparts seek to exit from crisis-mode policies.

Japanese consumer confidence declined to a 5-month low of 36.7 in January, largely due to uncertainties caused by growing cases of the Omicron strain in most parts of the country. Retail sales decreased 1% in December, turning negative for the first time in four months, while the yearly rate improved 1.4%.

Household spending increased to 0.10 percent in December from -1.30 percent in November, with the annual rate declining declined 0.2%, missing forecasts of a 0.3% increase.

The Australian dollar regained lost ground over the month of December closing 2.3% higher relative to the greenback and 1.5% in trade-weighted terms.

Headwinds early in the month from the unravelling Omicron COVID-19 variant plummeted the AUD to its annual low of 0.69, the only time the pair had dipped below 0.70 in 2021. Toward the end of the month conditions seemed to stabilise into the festive period as the globe acquainted itself with this new, much more highly infectious but seemingly milder symptomatic variant. Albeit as previously observed, lockdowns abroad provoked a withdraw of investor confidence as evidenced during the announcement of the nation-wide lockdown of the Netherlands and tightening of restrictions in pockets across the globe.

Disclaimer: This document is for the exclusive use of the person to whom it is provided by Lonsec and must not be used or relied upon by any other person. No representation, warranty or undertaking is given or made in relation to the accuracy or completeness of the information presented in this document, which is drawn from public information not verified by Lonsec. Financial conclusions, ratings and advice are reasonably held at the time of completion but subject to change without notice. Lonsec assumes no obligation to update this document following publication. Except for any liability which cannot be excluded, Lonsec, its directors, officers, employees and agents disclaim all liability for any error or inaccuracy in, misstatement or omission from, this document or any loss or damage suffered by the reader or any other person as a consequence of relying upon it.Copyright © 2022 Lonsec Research Pty Ltd (ABN 11 151 658 561, AFSL No. 421445) (Lonsec). This report is subject to copyright of Lonsec. Except for the temporary copy held in a computer's cache and a single permanent copy for your personal reference or other than as permitted under the Copyright Act 1968 (Cth), no part of this report may, in any form or by any means (electronic, mechanical, micro-copying, photocopying, recording or otherwise), be reproduced, stored or transmitted without the prior written permission of Lonsec. This report may also contain third party supplied material that is subject to copyright. Any such material is the intellectual property of that third party or its content providers. The same restrictions applying above to Lonsec copyrighted material, applies to such third party content.