Month in Review reporting on the month of December. This review provides economic commentary with Australian and Global economic summaries as well as market news for each asset class. 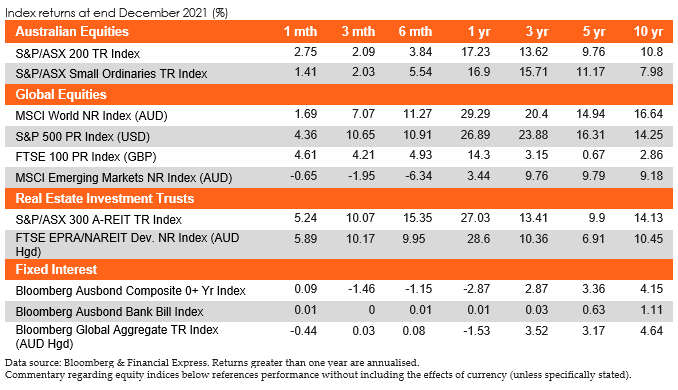 Australian equities
The Australian share market closed out December 2021 with the S&P/ASX 200 gaining 2.75% with eight out of the eleven sectors within the Index finishing higher. Specifically, Utilities was the standout sector with a return of 7.9%, whilst Materials (+6.5%) and Property (+4.9%) delivered strong returns. A heavy decline in the Information Technology sector (-5.3%) failed to stop the broader ‘Santa Rally’ to close out the year.

The local miners were bolstered by the iron ore price recovery given the optimism around Chinese demand for the commodity in the intermediate term alongside the expectations for potential further stimulus measures within China’s economy. The Utilities sector pared back some heavy yearly losses and investors looked for some defensive exposure. The Information Technology sector suffered heavy declines as investors weighed up the potential central bank interest rates rises in the intermediate term.

Low Volatility and enhanced value were the strongest performing factors for the month with gains of 4.1% and 4.2% respectively. All factors finished with positive returns for the month with growth providing the lowest increase at 2.0%. Year to date, value finishes the year as the leading factor (+20.9%), albeit with the lowest quarterly performance amongst all factors.

Following a disappointing end to November, global markets closed out 2021 strongly posting an annual return of 29.6% in Australian dollar terms. Developed markets closed 1.7% higher by month end, trailed by Emerging and Asian markets declining by -0.7% and -1.1% respectively. Global small caps lagged their broad cap equivalents during December recording a gain of 1.1% for the month.

Markets struggled to build momentum early in the month of December as the emerging and enigmatic Omicron variant of the COVID-19 virus continued its spread across the globe. As understanding about the new strain, particularly its highly infectious but less potent nature developed, investors were reassured that economic growth would not be stalled as governments widely exercised restraint with reinstituting lockdowns and restrictions abroad.

Notably, Emerging and Asian markets posted disappointing year end annual returns of 3.4% and 0.9% according to the MSCI Emerging Markets NR Index (AUD) and MSCI AC Far East NR Index (AUD) indices respectively. This is mainly attributable to the more difficult conditions that emerging economies have had to cope with in the face of a COVID-19 centric world.

Global real estate equities (represented by the FTSE EPRA/NAREIT Developed Ex Australia Index (AUD Hedged)) also finished strongly, achieving a 6.1% gain for the same month, and totalling 30.2% for the year. Whilst the Pandemic hit the retail sector particularly hard, the U.S. Census Bureau’s Business Formation Statistics data shows there have been more new business applications in 2021 (through to November) than any other year on record, and with the applications being dominated by retail, it may indicate a continued recovery of the sector during 2022 (NAREIT, DeLullo, December 2021).

December was a relatively muted month for Australian Fixed Income markets, while inflation has continued to dominate the discourse Australian yields have remained relatively static. The yields for 2- and 10-year Australian Government Bonds fell by approximately 2 and 5 basis points respectively over the course of December, although both have since increased again since January has begun. Credit spreads also tightened somewhat over the month, which aided the Bloomberg AusBond Credit 0+ Year Index in outperforming the Bloomberg AusBond Composite 0+ Year Index with returns of 0.2% and 0.1% respectively.

Internationally, inflation also dominated the discussion, but the month played out very differently, as can be seen, most evidently in the US. In its December meeting, the US Federal Reserve adopted a more hawkish approach and announced a more rapid taper of their bond purchases and alluded to the possibility of interest rate hikes later in the year. This prompted an increase in US yields across the entire spectrum of maturities with market participants pricing in three rate hikes for the year. This drove overall returns of -0.4 for the Bloomberg Barclays Global Aggregate Index (AUD Hedged), with the unhedged variant returning -2.6.

The RBA left the cash rate unchanged at 0.1%, as widely expected, and will continue its $4-billion-a-week bond-buying stimulus program until at least mid-February. Retail sales lifted 7.3% in November, well above the expected 3.9%, as consumers brought forward Christmas spending to take advantage of sales and minimise delivery and stock availability concerns. November’s unemployment rate fell to 4.6%, well below market estimates of 5.0%, with the participation rate increasing to 66.1%.

The Westpac consumer sentiment index declined 1% to 104.3 in December, amid mounting concerns around the newly emerging Omicron variant. The Markit Composite PMI fell to 54.9 in November, pointing to a slower rate of private sector output growth, though high by historical standards.

The trade surplus declined to $9.42 billion in November from a downwardly revises $10.78 billion in the previous month and below market consensus of $10.6 billion. It was the smallest trade surplus since April 2021, amid softening global demand as more countries battled with a resurgence of coronavirus infections.

Global Covid-19 cases continue to rise with numbers surpassing 282 million cases and 8.7 billion vaccine doses administered as at the end of December. The global surge in Omicron variant cases caused lockdowns and restrictions in many European countries, even in the wake of widespread booster immunisation programs. Global supply chains are still constrained – and likely to remain so for the next 18 months – as major shipping ports remain backlogged with infrastructure unable to keep pace with contain vessels due to a lack of land crews and truck drivers.

The Federal Reserve kept its policy rate unchanged at 0.00-0.25%, as expected and announced at its December meeting it would end its pandemic-era bond purchases in March, paving the way for three interest rate hikes by the end of 2022.

PPI increased 0.8% in November, above expectations of 0.5% growth with yearly rate increasing from to 9.6%.

The Markit Composite PMI came in at 57.0 in December 2021, little-changed from a November's final reading of 57.2, mainly driven by strong growth in the service sector.

Philadelphia Fed Manufacturing Index fell sharply in December to 15.4, well below the 28.8 expected and the weakest reading since December 2020.

The trade deficit increased to $80.2 billion in November, from an upwardly revised $67.2 billion gap in October and close to the record high of $81.4 billion in September.

The European Central Bank made no change to interest rates at its December meeting, holding them at 0.0%. However, it announced the reduction in the pace of its asset purchases under its €1.85 trillion PEPP next quarter with the scheme to be wound down in March 2022.

The annual inflation rate rose to 5.2% in November, above expectations of 4.5%, with higher energy prices mainly contributing to this rise.  Both economic sentiment and consumer confidence fell in November – to 114.5 and -9.5 respectively.

The unemployment rate fell 10bps to 7.2% in November, as widely expected.

The Markit Composite PMI fell 2.1 points to 53.3 in December, resuming a slowdown trend amid a resurgence of COVID-19 infections.

Retail sales grew 1.0% in November, well above the expected 0.5% fall, with the yearly rate also ahead of expectations, rising 7.8% (5.6 expected). Industrial production increased 2.5% in November, reversing the 0.8% fall the previous month.

In the UK, The Bank of England unexpectedly increased interest rates from 0.10% to 0.25% at its December meeting, as inflation pressures continue to mount.

The unemployment rate fell 10bps to 4.2% in October, the lowest rate since June 2020, and in line with market expectations.

The Markit/CIPS Composite PMI dropped to 53.2 in December, missing market expectations of 56.4, with the manufacturing PMI dropping to 57.6 over the same period.

Industrial production rose from an annual rate of 3.5% to 3.8% in November, slightly higher than expected.

The unemployment rate rose marginally to 5.0% in November, against expectations of a flat 4.9%. Annual retail sales fell in November to 3.9%, well below the 4.9% of the previous month and the 4.7% expected.

The Caixin Manufacturing PMI rose 1.0pt to 50.9 in December, beating expectations of 50.0. The Caixin Composite PMI rose to 53.0 in December from 51.2 a month earlier. This was the fourth straight month of growth in private sector activity and the strongest pace since July, amid stronger rates of output growth across both manufacturing and service sectors.

The trade surplus widened sharply to an all-time high of US$94.46 billion in December from US$71.7 billion in November, easily beating market forecasts of US$74.5 billion.

The Bank of Japan left interest rates unchanged at -0.10% during its December meeting. Additionally, policymakers elected to reduce corporate debt buying to pre-pandemic levels while extending emergency pandemic funding by six months until the end of September 2022 to support the financing of small and medium-sized firms.

Japan’s unemployment rate rose 10bps to 2.8% in November, slightly ahead of expectations of 2.7% and the first increase in six months.

Household spending unexpectedly declined 1.3% November, missing market forecasts of a 1.6% rise. This was the fourth straight month of drop in personal consumption, amid worries over the rapid spread of the Omicron strain of COVID-19 that could hamper the economic recovery in the final quarter of 2021.

Inflation increased 0.3% in November, with the annual rate rising 0.6%. This is well below the central bank’s 2% target rate and behind other advanced economies amid softer wage growth and weak consumption.

The Australian dollar regained lost ground over the month of December closing 2.3% higher relative to the greenback and 1.5% in trade-weighted terms. Headwinds early in the month from the unravelling Omicron COVID-19 variant plummeted the AUD to its annual low of 0.69, the only time the pair had dipped below 0.70 in 2021. Toward the end of the month conditions seemed to stabilise into the festive period as the globe acquainted itself with this new, much more highly infectious but seemingly milder symptomatic variant. Albeit as previously observed, lockdowns abroad provoked a withdraw of investor confidence as evidenced during the announcement of the nation-wide lockdown of the Netherlands and tightening of restrictions in pockets across the globe.