Welcome to the June edition of the Market Update 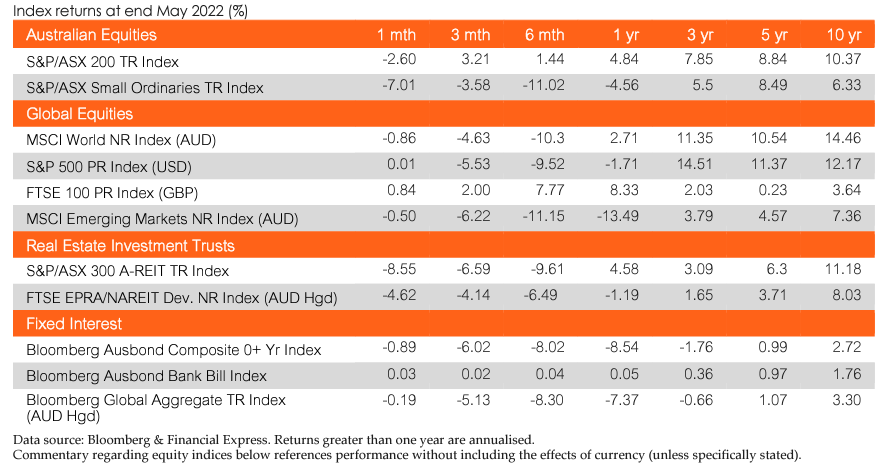 The Australian share market finished May 2022 with the S&P/ASX 200 falling sharply by -2.6% and ten out of eleven sectors finishing lower. Specifically, the Materials sector was the only positive finisher for the month (+0.1%). The Property (-8.7%) and Information Technology (-8.7%) sectors led the sell-off as persistently higher inflationary figures, geopolitical tensions and tapering fears supressed equities. The Materials sector outperformance was primarily driven by the Ukraine and Russia geopolitical situation given the significant disruption to supply within commodity markets. The Property sector suffered heavy losses as investors evaluated the commencement of the tightening monetary policy for the first time in over a decade. Likewise, the rout in the Information Technology sector continued as rising interest rates worldwide and potential recessionary fears subdued growth stocks. Overall, the sharp decline was triggered by a mixture of elevated inflationary figures arising from the ongoing Ukrainian conflict, Chinese lockdowns, and the ensuing monetary policy response from central banks worldwide.  In May, all factors finished negatively with Equal Weight (-5.3%) and Shareholder Yield (-5.1%) being the biggest laggards. Enhanced Value (+8.4%) and Value (5.0%) are the top year-to-date performers. Similarly, Enhanced Value (17.3%) is the leading factor over the past twelve months.

Downward velocity in global markets tempered over the month of May as the war in Ukraine endures, inflation continues to escalate and Covid restrictions in China persist. Developed markets marginally fell by 0.8% by month end, Global small caps didn’t fare as well as their large cap counterparts closing with a -1.5% loss. Emerging markets performed similarly to the previous period falling by -0.5%, whereas Asian markets posted a modest gain of 0.2%. Investor sentiment continues to be challenged by geopolitical risk and inflation pressures as central banks contemplate the pace and quantum of rate rises required to stem the tide of rising costs of living. Value and growth factors were the best performers over the month returning 2.5% and 0.9% respectively, whilst quality and momentum factors lagged returning -1.5% and -0.4% respectively according to MSCI ACWI Single Factor Indices reported in local currency terms.

Local and Global REITs sold off during May. Domestically, the A-REITS Index (represented by the S&P/ASX 200 A-REIT Accumulation Index) ended the month -8.7% lower, the second worst monthly performance since May 2020, with January of this year taking first prize (-9.5%). The Index has returned -14.7% on a total return basis YTD to 31 May. Global REITs outperformed the local REITs index, albeit still experiencing a drawdown of -4.5% during the month. Domestically, infrastructure (represented by the S&P/ASX Infrastructure Index) has continued its divergence from A-REITs, returning 1.2% in May and 16.9% YTD. A large driving force behind the divergence may be explained by the high levels of financial leverage common across the REITs sector. On the A-REIT corporate front, green was the theme of the month, with Goodman Group (ASX: GMG) pricing US$500m of sustainability-linked bonds and Vicinity Centres (ASX: VCX) announcing its inaugural Green Bond, issuing $300m of six-year AUD-denominated medium-term notes. Growth continued to slow across the residential domestic property market during May, with Sydney, Melbourne, and Canberra all returning negative returns of -0.1%, -0.7% and -0.1%, respectively. Adelaide experienced the largest increase of 1.8% for the month. The 5 capital city aggregate changed by -0.4% MoM. (CoreLogic)

The past month has seen a continued rise in bond yields, following The Reserve Bank of Australia raising the cash rate on May 3rd by 25bps to a 0.35% cash rate. With higher yields across the curve, combined with the outlook of risks to growth, bonds are again beginning to show some of the benefits of diversification in a portfolio. Since the start of May, Australian 2 Year Government Bonds have increased by 2bps while Australian 10 Year Government Bonds rose by 22bps as at the end of the month. Credit spreads continue to widen throughout May, resulting in the Bloomberg AusBond Composite 0+ Yr Index returning -0.9% this month, and YTD performance remains poor at -8.8%.  Globally, tightening cycles continue in an attempt to control inflation. While the US Federal Reserve has not raised rates since the +50bps movement on May 4th, meeting minutes show that the Federal Reserve has made strong commitments to another 50bps move in June and July. US 90 Day T-Bills and US 10 Year Bonds remained steady since last month at 0.8% and 2.3% respectively.

The RBA raised the cash rate to 0.35% in May, the first increase in 10 years, amid rising inflation. GDP grew by 0.8% in 1Q22, above the 0.7% expected, with year over year GDP falling from 4.2% to 3.3%.  The unemployment rate fell to 3.9% in April, matching expectations and coming amid a steady recovery from the pandemic. Retail sales increased by 0.9% in April, bringing the annual increase to 9.7%.  The Westpac-Melbourne Institute Index of Consumer Sentiment fell 5.6% in May, down for the sixth month in a row amid surging prices and the prospect of faster interest rate hikes. The NAB Business Survey for April dropped 6 points to 10, led by the easing of confidence in the transport and utilities, recreation and finance sectors.  The S&P Global Composite PMI declined to 52.9 in May, with both manufacturing and service output weakening, with manufacturing output hampered by supply chain constraints.  The trade surplus increased to $10.5 billion in April, beating market forecasts of $9.3 billion, as exports rose and imports declined.

Global Covid-19 cases continue to rise with numbers surpassing 526 million cases and 11.8 billion vaccine doses administered as at the end of May. Continuing lockdowns in China, notably in Shanghai, have had an ongoing impact on global supply chains, especially in the electronics sector. The war in Ukraine continues to put pressure on global food supplies, with an estimated 80 million people on East Africa facing starvation as grain and cooking oil remain stuck in Ukraine and Russia. Increasing cost of living concerns are impacting consumer sentiment in most developed area, especially in the USA and UK. The US Federal Reserve has raised rates by 0.5%, the most aggressive interest rate increase in over 20 years, in response to the high inflation rate. The Fed also flagged that more 50 bps increases are likely to be implemented in the coming months.  Inflation rose 0.3% on April, above the anticipated 0.2%, with the annual rate falling to 8.3% as the impact of rising interest rates start flowing through. Consumer sentiment dropped to 58.4 in May, the lowest figure since August 2011 and below the expected 59.1.  Non-farm payrolls added 390,000 jobs in May, the lowest level in a year but above the forecast 325,000. The unemployment rate was unchanged at 3.6% in May. Personal incomes grew 0.4% in April, which is below the anticipated 0.5%.

Annual retail sales grew 8.20% in April as consumers continue to spend, despite high levels of inflation. The S&P Global Composite PMI dropped to 53.6 in May, amid higher selling prices and supply chain disruption.  PPI increased 0.5% in April which was in line with expectations, with the annual rate rising to 11%.

The trade deficit contracted to US$87.1 billion in April, below the US$90.2 billion expected.  The annual inflation rate in the Euro area rose to 8.1% in May, well above the anticipated 7.7% and largely driven by very high energy prices.  Consumer confidence increased 0.9 points to -21.1 in May as expectations about future financial positions saw some relief. Retail sales fell 1.3% in April, against market expectations of a 0.4% increase. Rising prices of food, drinks and tobacco pushed the annual rate to +3.90%, which is below the market forecasts of 5.4%.  Unemployment was remained at 6.8% in April and in line with market expectations.

The S&P Global Composite PMI fell to a four month low of 54.8 in May, a result of softer service sector expansion amid signs that the post lockdown rebound is losing strength.  PPI rose to 1.2% in April, while the annual rate increased 37.2%, below the anticipated 38.5%. In the UK, GDP decreased by 0.1% in March, with the last 3 months coming in at +0.8%. Inflation rose 2.5% in April, below the 2.6% expected, with the annual inflation rate rising to 9.0%.  The unemployment rate fell slightly to 3.7% in March, in line with expectations.  Consumer confidence fell to -40 in May amid growing concerns over the cost of living.

The unemployment rate rose to 6.1% in May, amid prolonged COVID-19 restrictions following widespread outbreaks in some key cities.  The Caixin Composite PMI rose to 42.2 in May from April's 26-month low of 27.2, amid easing of COVID-19 curbs in Beijing. The Manufacturing PMI l came in at 48.1 in May, slightly above the anticipated 48.

Annual retail sales came in at -11.1% in April, significantly below the -6.2% expected and the -3.5% in March.  China’s trade surplus widened sharply to US$79.76 billion in May, far above market forecasts of US$58 billion.

Shanghai remained under strict lockdown in May, continuing the squeeze on global supply chains, but the lock down is due to lift on June 1.  The Bank of Japan said country’s economy is projected to grow more slowly, amid headwinds from a resurgence in COVID-19 cases and a rise in commodity prices due to the situation in Ukraine. Japan's annual inflation rate rose to 2.5% in April, marking the eighth month in row of increases, with food prices rising at the fastest pace in 7 years.

Japan’s unemployment rate dropped 10bps to 2.5% in April, ahead of the anticipated 2.6%.

Japanese consumer confidence rose to 34.1 in May, above the anticipated 33.5. Retail sales increased 0.8 % in April, with the annual rate rising 2.9%, exceeding the anticipated 2.6%.

The Composite PMI came in at 52.3 in May, with the PMI Services coming in at 52.6 in, the second straight month of expansion in services activity, notably in the tourism sector.

Japan remains closed to most international visitors but will open to limited tour groups from June 10.

The Australian dollar regained lost ground over the month of May, closing 1.8% higher relative to the greenback but weakened in trade-weighted terms closing -0.8% lower by month end. The dollar reached its lowest level in two years by mid-month, as indications of a slowdown in China mounted and fears of a global recession surfaced. Despite these headwinds, the RBA have provided support to the AUD with rate rises in excess of consensus estimates.